E-BOOK - My Life with a Theory

Holland’s theory of vocational personalities and work environments has had massive influence on the practice of career counseling, the classification of occupations, and the conduct of career development. Our principal intent in this book is to make public Holland’s autobiography entitled, “My Life with a Theory.” We have also included book chapters and journal articles that we believe will enhance reader understanding of both the theory and the scientist. The material assembled in this volume is also intended to serve as a resource for teaching graduate students about Holland’s theory, the scientist, and the tools and methods he developed. The book provides in one place original statements of the theory by Holland, articles about the nature of the scientific and professional contributions widely used by counseling professionals today, and evaluations (admittedly with a positive bias) of those contributions. Indeed, we expect that the main audiences for this book will be counselor educators, counseling psychology faculty, career practitioners and graduate students in counseling and psychology.

SECTION 1: Holland’s Theory In His Own Words

SECTION 2: My Life with a Theory: An Autobiography by John L. Holland

SECTION 4: Perspectives on Holland’s Contributions to Research and Practice

Sale on Series in August Only! 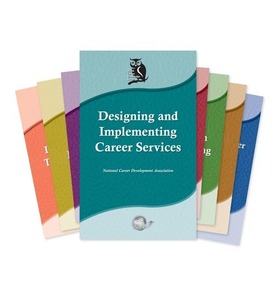 NCDA’s Career Knowledge Series is designed for individuals wishing to understand career development. Each of the 8 titles in the series provides a thorough introduction and discussion for its specialized topic and is between 30 and 80 pages. Titles in this series include:

This month, the complete multi-book series which includes 8 titles is discounted by $10. Continue shopping the Career Resource Store to purchase the discounted series or view more about each one in the series (Note, each book can be purchased independently at the regular price.)

Sale on Series in August Only!

Many of our products include links to Book Reviews or Excerpts, which are also archived in our Career Convergence web magazine.