History and Past Editors

As part of some other historical research I am conducting, I developed a list of all the editors of the journal of the National Career Development Association - The Career Development Quarterly - and thought it would be a valuable archival piece to include here for the historians of our profession in my last issue as editor of our journal.

In 1911, the progenitor of CDQ - the Vocational Guidance News-Letter - was founded under the editorship of Frederick J. Allen. From that beginning, the listing below identifies the chronology of the changes in The Career Development Quarterly with both journal names and journal editors.

The 1952 NVGA Board of Directors, however, wanted to also maintain it's own journal, a journal devoted to career counseling and career development. The Vocational Guidance Quarterly (VGQ) was a direct descendant of and arose from Occupations. VGQ took over the historical mission and purpose of Occupations, while the operations side of the journal was transferred to the new APGA. A new editor was selected for VGQ (Max F. Baer, who was also serving as NVGA President) along with an editorial board that included many of the editorial board members from Occupations, and the NVGA journal continued to publish without missing an issue.

The complicating factor in all this is that, although the new APGA journal continued the volume numbers of Occupations, beginning with volume 31 (Ginter, 2002), it has not continued the history, mission, and purpose nor does it even always acknowledge it's lineage. In fact, as recently as 2006 in volume 84, number 2 of the Journal of Counseling & Development (JCD), the historical listing of editors of that journal (p. 255) only begins with William D. Wilkins in 1952.

We feel strongly that The Career Development Quarterly (CDQ) must reclaim it's past and acknowledge the historical contributions of all of it's previous editors. We do not quibble with the dual branched heritage of JCD and CDQ and would encourage JCD to acknowledge it's historic roots, but we are also clear about the lineage of our journal. Our current volume number may be only 56, but we know the historical reality is much different and so we publish here the list of the editors of the journal of NCDA - The Career Development Quarterly - from it's true and proper historic beginning, 1911.

Further, there is precedent to renumber journal volumes downward -- witness the combining of the two major school counseling journals. After publishing 735 manuscripts in the Elementary School Guidance and Counseling (volume 31) and 850 in the School Counselor (volume 44), the two journals merged in 1997 to form Professional School Counseling, volume 1. Although the history is not lost, it is much more difficult to decipher.

Also, rarely have journals retrieved their original volume numbering schema and we are not proposing this. Although that might be appropriate here, we feel that it would be potentially confusing for our profession and for other readers of our journal in the years to come. We are, however, reclaiming our history and lineage and acknowledging the contributions of our previous editors to the knowledge of our field from 1911 to the present time.

Finally, this is the last issue of my last volume as CDQ editor as I have finished my term. I am passing on the editorship of The Career Development Quarterly to Professor Jerry Trusty of Pennsylvania State University. He will be an outstanding editor of our journal.

Thank you for allowing me to have been both the principal guide and guardian of this important journal for these last three years. It has truly been a labor of love.

Read this article published in the NCDA web magazine, Career Convergence, as part of series during our 100th anniversary celebration.  This includes a free virtual edition of CDQ which republished the eight most cited articles published in this journal during the past century. 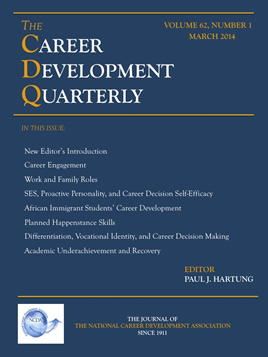