The Center for American Progress (Warner et al., 2018) states that though they make up 38 percent of the nation’s female population, women are only 3.9 percent of executive and senior level officials. The gap is even wider for minority women. Today, the pandemic has caused those numbers to look worse. According to the Women in the Workforce Study, mothers, especially minority women, are leaving the workforce at a greater pace than fathers because they are more likely to be the caregivers in the home. Closing this gap will require application of uncommon strategies, such as the Women’s Career Fair, that start early in students’ career planning.

A specialized career fair was created by a high school in Detroit, Michigan, to expose students to examples of powerful, diverse women from various industries. By participating in the program, students can dream and imagine what is possible for women in the workplace beyond the limitations projected by society at large. The high school's diversity club took a year to research the concept, plan, collaborate and strategize to ensure success. Other high schools are encouraged to follow.

Shonda Rhimes’ commencement speech embodied the sentiments behind the goal of the women’s career fair sponsored by the Diversity Club at Royal Oak High School (ROHS). “Dreams are lovely but they are just dreams. Fleeting, ephemeral, pretty. But dreams do not come true just because you dream them. It’s hard work that makes things happen.” she stated. Sponsoring the Women in Power Career Fair, the Diversity Club/Council at ROHS provides students the opportunity to experience how these words came true for women in their community.

The idea originated from previous council members who attended the Oakland School’s Diversity Forum four years ago. The Diversity Club at ROHS, led by council members Emma Ervin and TJ Williams along with teacher/advisor Alyssa Reimold, organized the women’s career fair to help adjust students perspectives about women in the workforce and, in the process, help shift the culture at ROHS. They wanted to expose students to broader options and how much upward movement is possible for women.

The ROHS Diversity Club is in its fourth year and has approximately 25-30 members. Of those, about 15, along with three supervisors, volunteered at the career fair. It was difficult for the club, which is a not-for-profit group, to run professional events with little money, but in this instance, funding was from the Parent Teacher Student Association (PTSA) and food sales.

Implementation of the Career Fair

The fair was a one-day event during 5th and 6th hours in a regular school day, so students did not have to miss a whole day of school. This limited timing also made it easier for these high-powered women to participate. The fair was open to all grade levels in the school. The women presenters spoke to small groups of 4-5 students at a time. Students rotate through their top four choices of occupations, stopping at each table for 15 minutes. The participation of boys in the career fair was particularly valued, promoted and welcomed, principally because, according to the World Economic Forum (Lagarde & Ostry, 2018), three key benefits exist for men in hiring more women: increased gross domestic product (GDP), higher productivity and higher male incomes. 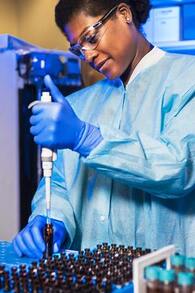 There are more career pathways than students recognize. Students tend to think about careers in terms of the subject areas taught in school buildings. The career fair showcased 26 women from various career fields. Categories included, but were not limited to science, technology, law, publishing, architecture, psychology, athletics, law enforcement, and trades/technical. Altogether, eighteen different fields were represented from Automotive Designing and Welding, Health Sciences to Culinary Arts. The presenters were encouraged to talk about their whole organization and all the different types of roles within their place of employment.

The Outcome and Participants’ Reactions

The students and women interacted and made good connections overall. The outcome of the career fair is best evaluated by the participants’ reactions.

Presenters and sponsors provided great feedback as well. Ms. Reimold, the teacher sponsor, shared a reaction that reinforces the general belief that students need to see women, specifically women of color, in positions of power. This is important for all students and not just those that identify as female. The women who participated indicated a willingness to return and interact further with the students.

Showcasing successful women of diverse cultural and social backgrounds from different career fields who are participating in the workforce has been one of the overarching goals of this career fair. While this was a successful event, there were challenges to its implementation:

Going forward, the committee will seek to broaden its reach to women of color in the Detroit Metropolitan community by reaching out well-ahead of a future career fair. With the advent of the Black Lives Matter movement, it is more important than ever to make sure that women of color are included and are given prominent places in society for the benefit of all students.

A few things that were critical to the successful execution of the event are worth highlighting. The PTSA participation and support were vital to the success of the career fair. It was important to focus on the school population and the area with regard to the occupations that are represented in the career fair. The committee aims to be sure that there is buy in by the whole school and that it is worth their professional’s time to participate. Thus, working with the staff was also important so that, working as a team; they join with the committee to encourage student’s understanding of the value of attendance. Planning a targeted career fair such as the Women’s Career Fair is a challenging but worthwhile undertaking.

Janet Norling is the Career Development Coordinator for Royal Oak High School in Royal Oak, Michigan. She has held this role for almost three years. Janet holds degrees from Michigan State University, Eastern Michigan University and Oakland University. She holds a Masters Degree in Reading and Language Arts. Recently, she became a Certified Career Services Provider. Janet lives in Michigan with her husband and has two children, Abigail and Shea. She can be reached at janet.norling@royaloakschools.org

This article was very interesting. It is eye-opening to read that only 3.9 present of executive and senior level officials are women. The Career Fair should be promoted to all schools. It is our responsibility to educate our younger generations of the opportunity's offered for them to become anything they dream to be.

Disclaimer: The opinions expressed in the comments shown above are those of the individual comment authors and do not reflect the views or opinions of this organization.